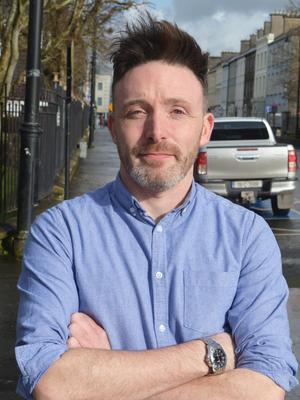 The Historian will be based at Kerry Library Headquarters, Tralee and will work under the direction of Kerry Library staff to co-ordinate research work and timelines; identify themes, events and notable figures; meet community groups and to promote interest and engagement in history among a non-academic audience. Initial work will focus on the identification of Kerry material for the period  1919 - 1922 held at Kerry Library and at national institutions such as the National Library and the National Archives.

A graduate of the University of Limerick, Tom completed a Certificate in Local History in 2012 and an MA with first class honours in the History of the Family in 2013.
Over the past six years, he has delivered a series of public lectures around the county about the Kerry men and women who took part in the First World War. He has also written articles on the subject for magazines, journals and newspapers along with speaking on radio and tv.

To coincide with the centenaries of the outbreak of WWI and the 1916 Rising, Tom wrote a hugely successful series of history supplements published by Kerry's Eye newspaper. He has also volunteered with Kerry County Museum and the Kerry Writers' Museum along with giving tours as part of the 2019 Architecture Kerry festival.
Tom says that ‘It is a huge honour to serve as the Kerry County Council Historian-in-Residence. On the 100th anniversary of the War of Independence, it is an exciting time to be researching the history of our county and country.
So many historical sources have been made available online in recent years and they have opened up a whole new light on the events of a century ago. From military pension records and medal applications to death inquests, they bring the conflict to life in a very personal way.’

During his residency, Tom's work is focused on compiling a detailed list of historical sources to be used as an aid in researching the lead up to and including the War of Independence in Kerry.